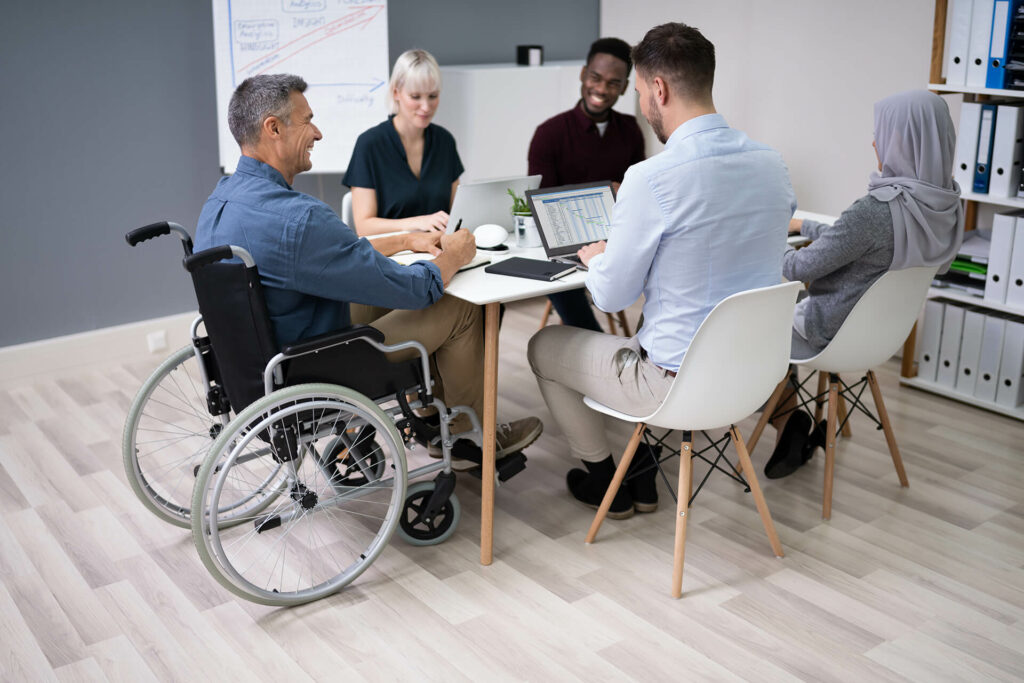 Benefits of Hiring Persons with Disabilities

According to Statistics Canada, persons with disabilities are more likely to be unemployed or underemployed due to inaccessibility and discrimination. Some employers may be concerned about the cost associated with making their workplaces accessible, but there are many benefits to hiring job seekers with disabilities.

Turnover is costly to employers because of the extra work involved in replacing the employee and bringing the new one up to speed. Because of the difficulties people with disabilities often face when it comes to employment, chances are they will appreciate job opportunities more. According to the Government of Canada, reduced turnover is one of the benefits of having an inclusive workplace and improved company morale and financial performance.

While this is not specific to disabilities, it has been studied and proven that diverse teams perform better. This is partly because of the different skills, experiences, and perspectives team members with different backgrounds bring to the table, making the team more innovative. Disability is only one of the many dimensions of inclusivity. Still, when you hire people with disabilities, you make everyone else feel inclusive about their ethnicity, gender, sexual orientation, or whatever sets them apart. With everyone feeling a part of the team, it is no surprise that the team performs better.

Sometimes disabilities come with alternative abilities. For example, while people with ADHD tend to have difficulties focusing on things they are not interested in, they could hyperfocus and hyper-fixate what interests them. By modifying the work duties of ADHD staff to be interesting to them, they might become very passionate about their jobs. Another example is that autistic people tend to have above-average math skills, which is a valuable ability that employers can harness.

Another benefit of hiring persons with disabilities is improved company’s image. We, humans, tend to identify with people that are similar to us. Ironically, that could also be one of the reasons why people discriminate. That said, having a workforce that is as diverse as your customers make your company look good and will likely bring you more customers.

Depending on the jurisdiction, there may be financial incentives such as grants and tax credits for employers to hire persons with disabilities or provide workplace accommodations. While it shouldn’t be the sole reason to do so, it is one of the many benefits and helps cover the cost of making workplaces accessible.

Of course, as a prospective employer, you may be wondering how much workplace accommodations would cost, and if these grants are enough to cover them. According to a 2016 report by Canadian Council on Rehabilitation and Work:

It Also Benefits Employees Without Disabilities

Some of the workplace accommodations, such as modified job duties, flexible hours, work from home and ergonomic workstations also benefit those without disabilities. When flexibility is offered to all employees, it makes the workplace even more inclusive, and therefore increases job satisfaction and reduces turnover.

Better for the Society

While there are people with disabilities so severe that they can’t work, many can and prefer to. However, they may still be unemployed or underemployed due to inaccessible workplaces or discrimination. Consequently, this would increase the need for government assistance programs, which are paid for by taxpayers. When barriers to their employment are removed, so are the barriers preventing them from contributing more to society.

We hope that employers, in general, would stop overlooking this untapped talent pool, which is why we built this job board. If you want to make your job postings accessible to job seekers with disabilities, especially ones with visual impairment, consider advertising with us.

This job board is operated by Project Pi Consulting Inc.